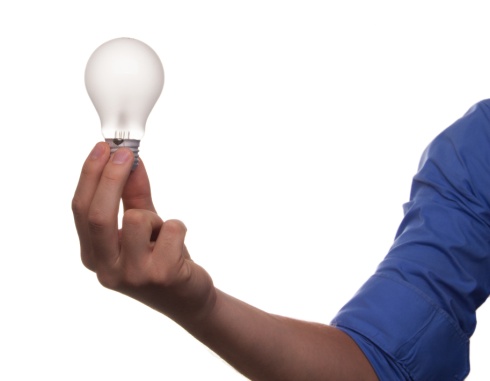 Dr. Keith Scott Mumby, one of my favorite natural health gurus, once stated:

“You must protect your memory as you age…There is no point in living to a great age if your brain doesn’t travel along with you.”

That hormone is known as pregnenolone. In 1995, researchers from the Proceedings of the National Academy of Sciences studied pregnenolone, and documented its astonishing ability to boost and maintain memory. They wrote that pregnenolone was…

Indeed, the National Academy of Sciences researchers concluded that pregnenolone was 100 times more effective for memory enhancement than any other hormone tested.

Dr. Joseph Mercola, D.O. author of The Total Health Program, agrees. He states that natural pregnenolone – which is derived from the Dioscorea yam – “seems to be the most effective bioidentical hormone for memory improvement.”

He also states that memory may falter as we age simply because our body’s pregnenolone levels drop precipitiously as we age. He writes:

“Pregnenolone seems to be the most effective bioidentical hormone for memory improvement…But pregnenolone levels decline with age.

Many physicians and scientists believe that replacement of pregnenolone to youthful levels is an important step in the treatment of aging and symptoms of aging.

Pregnenolone may be one of the most important hormones because it seems to have a balancing effect. It is a precursor to many other hormones and may be able to bring the levels of other hormones up or down as needed.”

Dr. Mercola goes on to state, “Pregnenolone also operates as a powerful neurosteroid in the brain, modulating the transmission of messages from neuron to neuron and strongly influencing learning and memory processes.”

Dr. Keith Scott-Mumby, M.B. Ch.B., M.D., Ph.D., F.R.C.P. (M.A.) agrees, adding that “Pregnenolone’s ability to block excess production of the stress hormone cortisol may be one of the main reasons for its known memory-enhancing and mood-boosting effects.”

Of course, this is not really new information. Way back in the 1940s researchers studied the impact of hormones on learning and memory, and found that pregnenolone significantly enhances motivation, the ability to acquire knowledge, and long-term memory.

For example, a group of industrial psychologists conducted studies in the 1940s to test pregnenolone on both students and workers for the ability to enhance job performance.

These researchers found that when pregnenolone was used, the students/workers had a markedly improved ability to learn and remember difficult tasks.

Pregnenolone not only enhanced the job performance of the students/workers, but they also experienced heightened feelings of alertness and well-being.

Later research demonstrated that pregnenolone helps maintain the “program” that brain cells need to store and retrieve short-term memories and initiate the memory storage process by stimulating the enzyme adenylate cyciase, which is needed to regulate and activate other critical enzymes required for cellular energy.

“Pregnenolone may be considered a good brain enhancer in those who are deficient in the hormone. Animal studies show pregnenolone to be one of the most effective and powerful memory boosters. Pregnenolone may increase levels of acetylcholine in the hippocampus and other memory regions in the brain.”

Indeed, when we’re younger, pregnenolone is said to be 10 times more concentrated in the brain than in the blood. And according to Livestrong.com, “Pregnenolone deficiency can manifest as impaired memory.”

According to the Integrative Medicine Center of Western Colorado, decreased memory due to pregnenolone deficiency can be improved with pregnenolone supplementation. 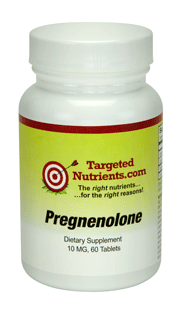 Where to Obtain the Very Best
Form of Pregnenolone…

Unlike synthetic prescription steroid hormones which can sometimes have terrifying side effects, pregnenolone is completely natural (made from an extract of the Dioscorea yam), and clinical studies have shown it to be virtually free of side effects when used as directed.

Targeted Nutrients carries therapeutic-quality pregnenolone in the highly recommended 10 mg. dosage. You get 60 tablets per bottle – a one or two-month supply for the average person.

The tiny chewable tablets are sweet-tasting, cherry-flavored, and can easily be broken in half for people who prefer to use lower dosages. (People normally take between 5 mg. and 10 mg. per day for age-related benefits, and up to 20 mg. per day for stronger therapeutic benefits such as for memory enhancement and mental clarity, or as part of a long-term anti-aging program.

Targeted Nutrients pregnenolone is regularly priced at $29.95 per bottle. However, we want to offer you a very special money-saving “get acquainted” deal. For the next 10 days only you can save BIG on therapeutic-quality pregnenolone by taking advantage of any of the four money-saving options at the following link

So give pregnenolone a try while this special, money-saving offer is still in effect. You’ll be glad you did, I promise!

P.S. You can order as many additional bottles as you’d like at the special discount price described above, but please be sure to act within the next 10 days!

This is strictly a one-time-only “get acquainted” offer, allowing you to stock up on pregnenolone at a steeply discounted price. So please do act quickly and decisively if you wish to take advantage of the special low pricing we’ve arranged for you.

“Within only a couple of days of using pregnenolone, I noticed benefits such as decreased ‘brain fog’, sharper thinking and reasoning ability and a happier and more relaxed attitude. Life’s daily hurdles don’t “loom” so large now and I handle things better as a result.

I take one 10mg tablet each morning and on occasion double the dose if I know I’m going to work through a particularly challenging day. I am able to honestly attribute the changes to the pregnenolone since I changed nothing else in my daily routine other than the addition of the supplement.

I was actually surprised that I was able to tell a difference so quickly and recommend the supplement to others. To check my results, I quit taking the pregnenolone after a few months for a week. That was enough and I immediately began taking it again. I call it my ‘happy pill’!”

“Within several hours of taking it, I felt like someone turned a light on inside my head. My foggy thinking cleared up. My energy returned. The feeling of malaise and depression simply vanished. It was like coming out of a dark tunnel and shedding a 75 pound backpack at the same time. I felt light and free again.

It really put a lift back into my step, and left me with a profound sense of confidence and well-being. What’s more, my libido soared from about a two to a nine on a scale of ten.

Since that time I’ve used pregnenolone periodically, for up to several weeks at a time, and always to great effect. It’s my first choice in nutritional supplements whenever I’m feeling low on energy or stamina, or just want that extra mental and physical boost.”

“I’ve noticed that I have a much more cheerful disposition, and I actually feel like getting things done again. I’m much more motivated. It has definitely helped put the pleasure back into my life.”